The 15th day and things have come to a pretty pass.

Last night at about 20:00 I arrived at Le Sylvana, a delightful looking small hotel among a group of chalets. On entering I was immediately confronted by the sight of Madame in an apron - who took one look at me, disappeared and reappeared a couple of seconds later, with what I assume were apologies for being so dishevelled. I explained that all the hotels in Briançon had been full, but that I had kindly been re-directed here. "Allemande?" was the single word answer - "Non, Anglais" I replied. I was immediately rewarded by a beaming smile, a hug, and Madame revealed her name was Collette, and told me I had certainly come to the right place. Mad, totally mad, a lovely bubbly batty woman.

I took my bags to my room, and then went to the bar and asked for a beer, as I was gasping by that stage. I explained I'd just come 530km from Pisa on a Vespa, and with a gasp of delight she hunted around, found a proper Brit pint glass, and proceeded to open two bottles, pouring one straight in. That disappeared down my throat in short order, the glass was taken from my hand and the second bottle emptied in. She pulled me into the kitchen, introduced me to her husband Maurice (chopping a huge pile of onions on the table) and her daughter (who later acted as waitress) - and pointed out to them the Hornet which was just under the kitchen window. Big beams all round - what a lovely relaxed and friendly place!

By this time the light was drawing in, so I took photos the next morning.

The view from the patio doors of my room: 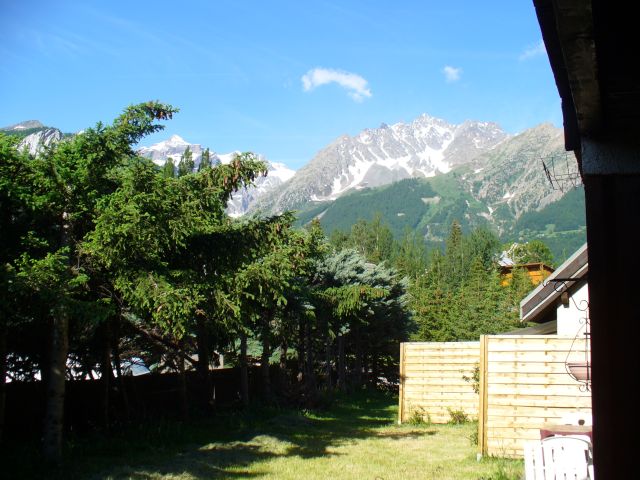 A gorgeous location - I'd been very lucky not to have been stuck in a soulless Ibis hotel in Briançon. 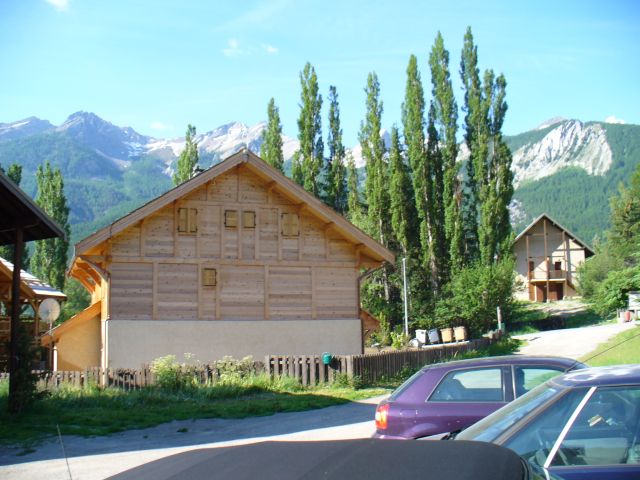 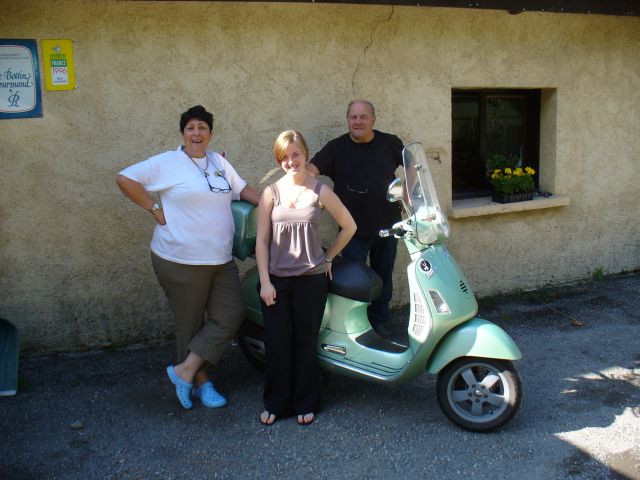 I set off, hoping to get to Belfort, to get into the upper half of France. 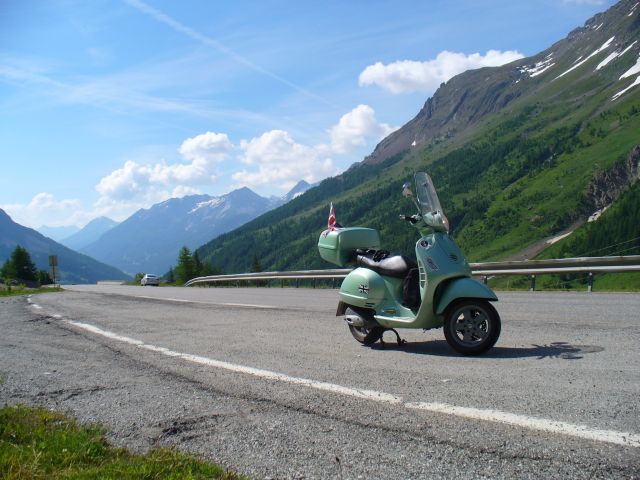 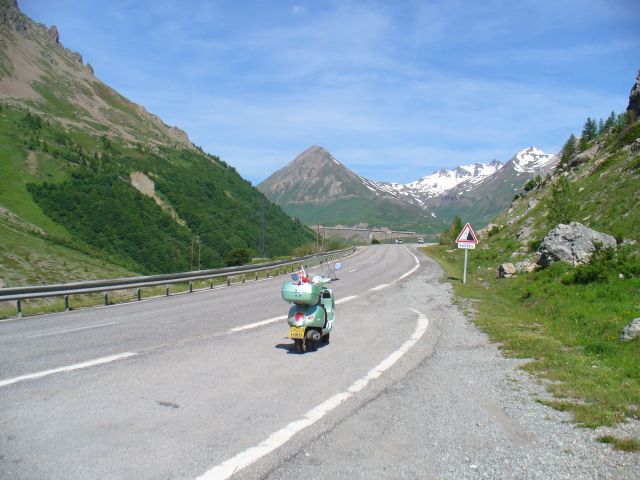 Again, the camera cannot do justice to the raw rock formations jagging their way upwards. 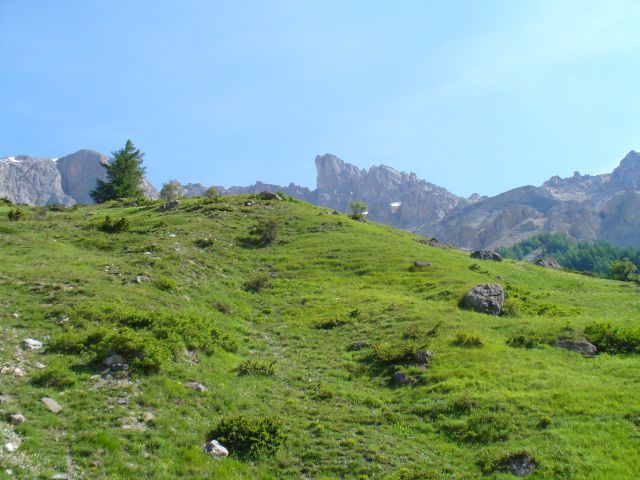 I was in heaven on this ride! 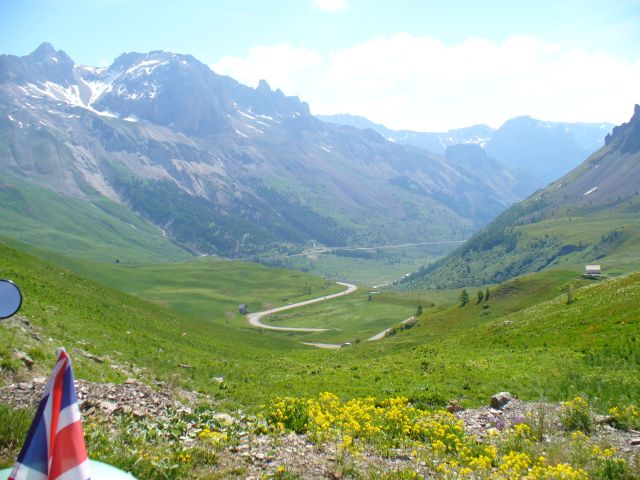 I noticed that the Hornet was running out of breath, it wouldn't go more than 50kph, and anything over quarter throttle was a waste of time. Eventually I found out why - 2645m up, 8678ft. Yay! 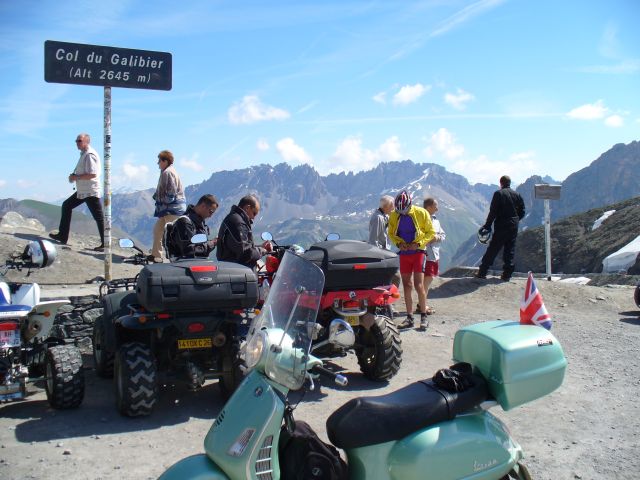 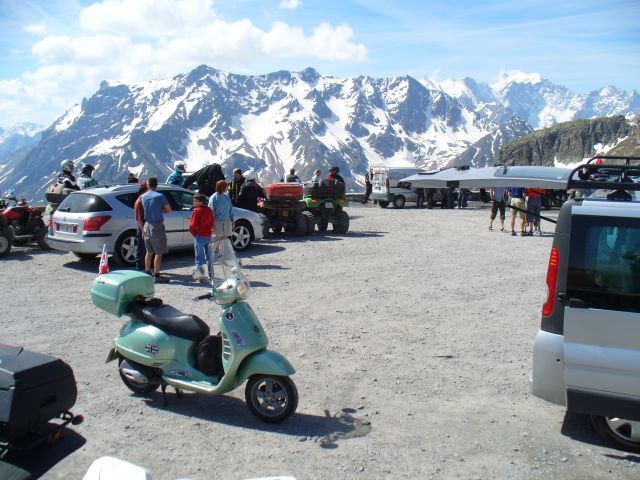 Others stuck stickers on the pole - I thought MV could show more initiative than that! 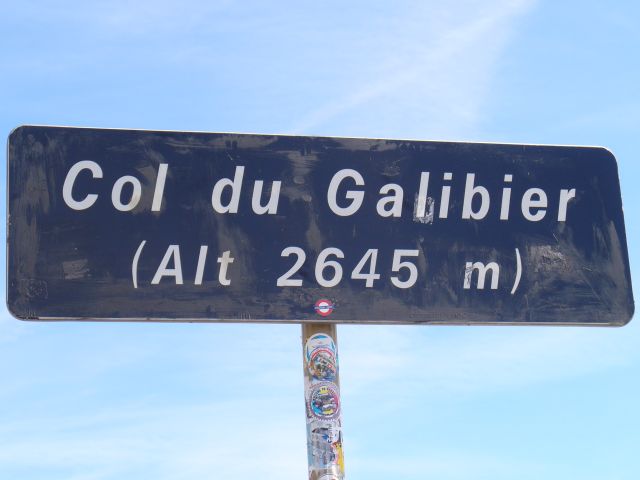 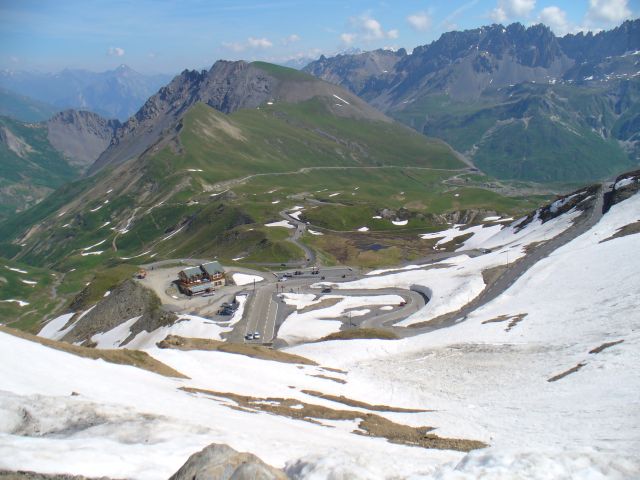 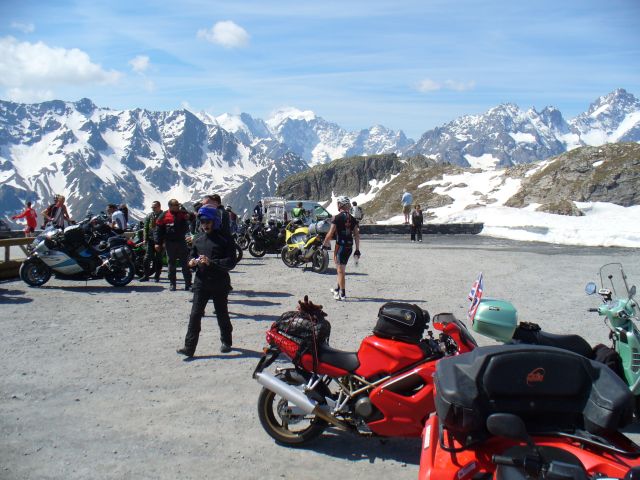 The cyclists were the ones I had huge respect for. 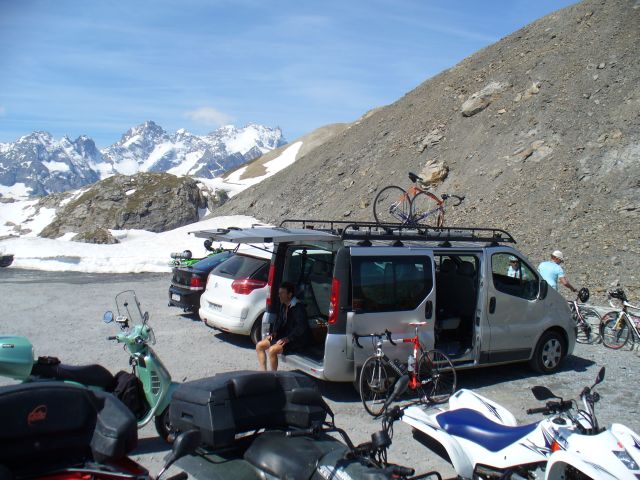 Despite my recent training in climbing hills, I declined to tackle this bit, I'd have been out of breath in sympathy with the Hornet! 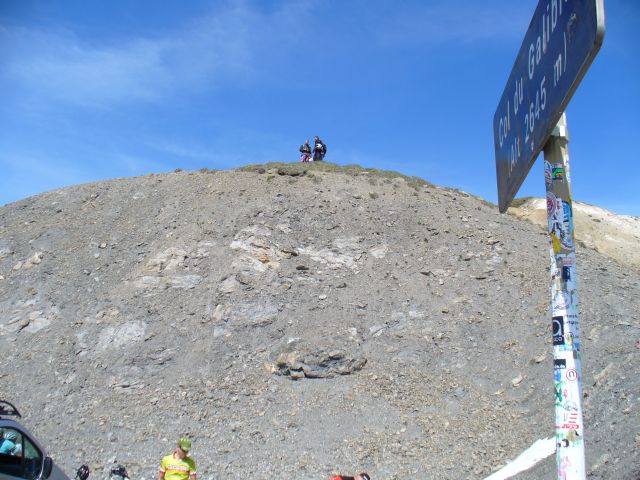 After a gorgeous ride down from the pass, I had a long stretch of boring straight road, so dived off sideways, and soon found a vineyard that I'm sure was featured on Oz Clarke's and James May's wine tour. IIRC the vines the other side of the road ahead at the T-junction would produce wine at EUR200 a bottle, the ones this side only (!) EUR30 a bottle. All to do with 'le terroir' apparently. 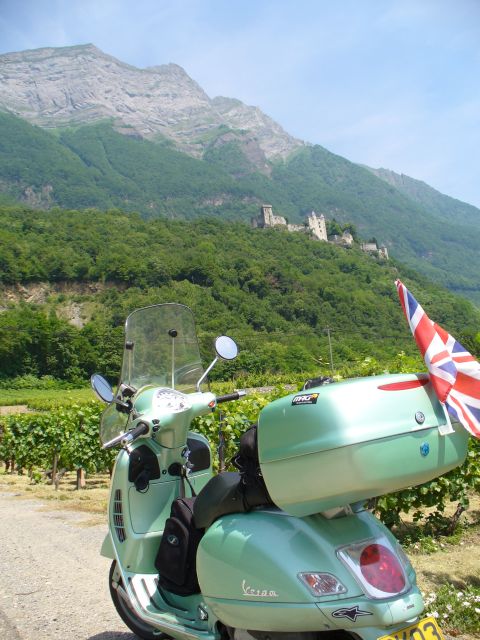 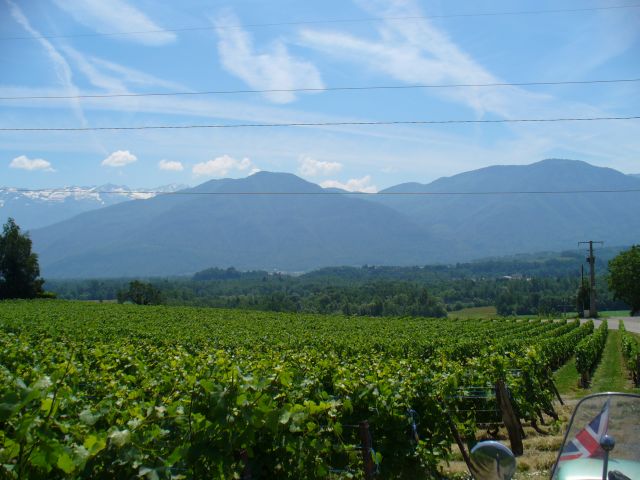 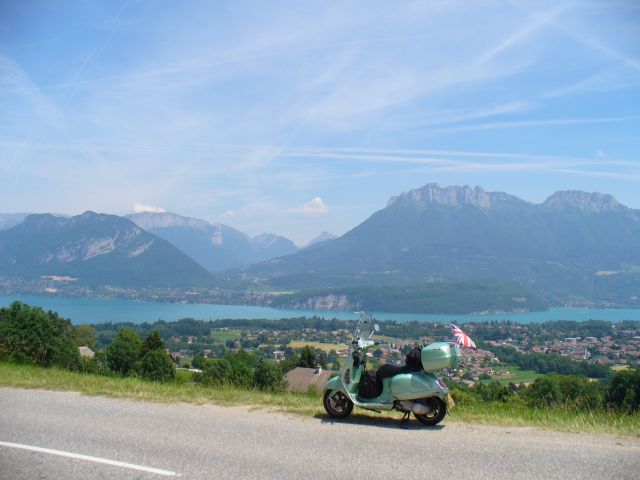 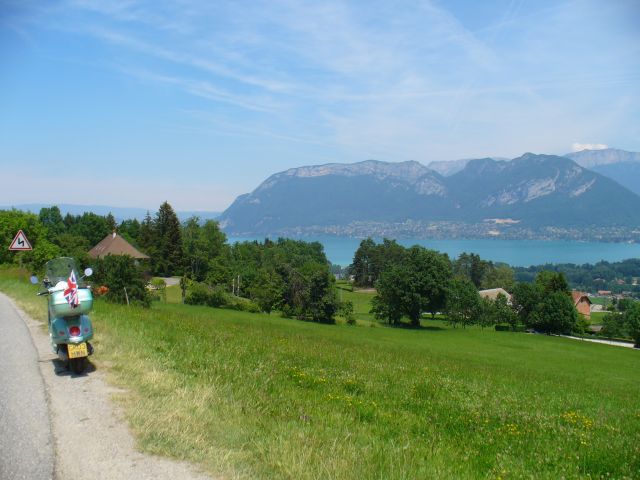 After a brief spell in Switzerland I rode through this gorge, where the rocks each side overhung the road. Some houses along the way almost didn't need roofs. 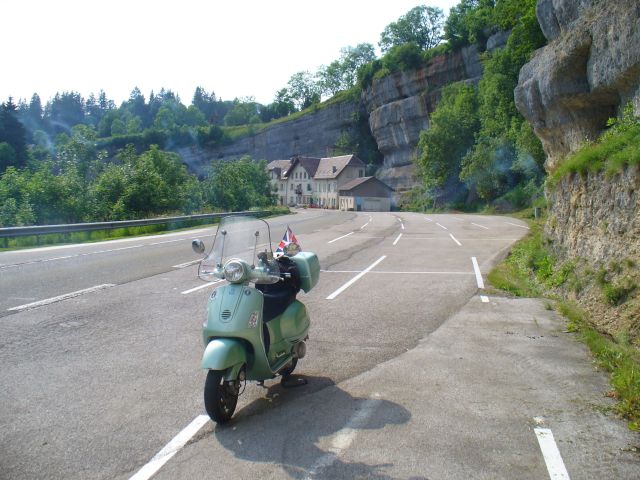 I didn't get as far as Belfort, I was knackered by 18:00, so stopped at the first hotel I could see in a pretty village called Le Russey. Turned out to be very moto-friendly and cheap, but with excellent food. Le patron wouldn't accept his wireless access point needed re-booting, but as I really couldn't get past it he took me into their private rooms, swept all his paperwork off his desk, and plugged me directly into their router. Very, very helpful. 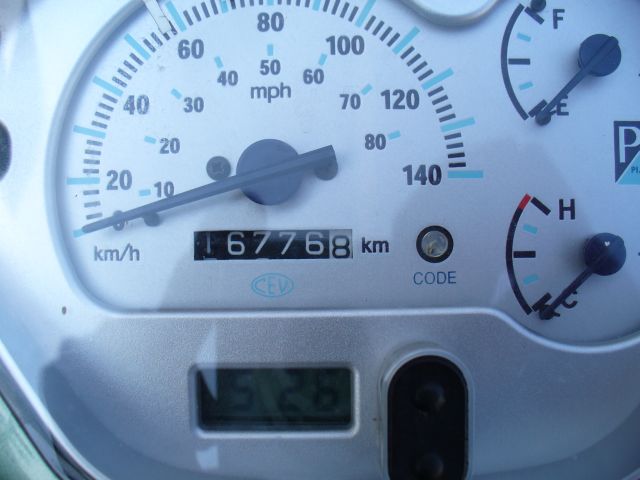 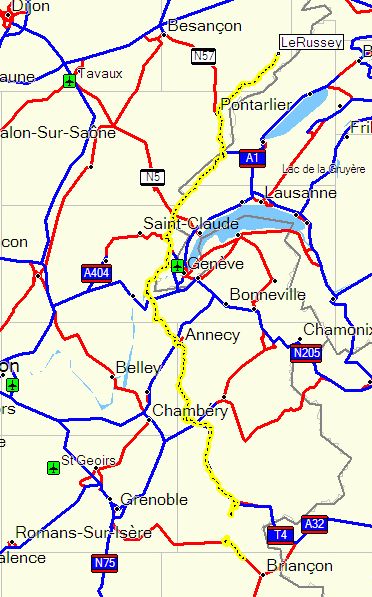